Fénérive Est or Fenoarivo Atsinanana is a real time and history machine. Even if few young people are able to tell you about the origins of their Community. They remain proud of their belonging as inhabitants of Fénérive Est. As "tourists", if you ignore this part of their identities, you will miss the Hospitality of this part of the ANALAJIROFO Region, the country or the capital of cloves. Looking at the faces and the smiles, you can see that the pirates have passed through here.

History always begins with a romance: Ratsimilao, son of a pirate.

From the 17th Century, the Pirates found refuge in the sector of the East Coast of Madagascar and Nosy Boraha (Sainte-Marie). These European pirates traded with the "natives". Above all, they needed drinking water and provisions. Meetings of the Third Type have taken place during pacts with local Chiefs.

At that time, the Unity of the country was not on the agenda. The different clans engaged in recurring fratricidal battles. On the one hand, tradition reports that the ANTANARATRA yielded to the TSIMBALA. These were led by Chief RAMANANA. The villages were surrounded by palisades, like those you can observe in the ADY-BE of the ROVA. These protections could not resist the TSIMBALA warriors.

In 1712, the Antanaratra took their revenge. Son of an English pirate and Princess Antavaratra RAHENA, Ratsimilao managed to seize the Fort of Vohimasina with a ruse of war, well known to Fanorona players. He pretended to give up and retreat. His Allies crowned him King of the Betsimisaraka, after this victory over the "Betanimena". Historical documents mention another name for this Half-breed King. He therefore founded the Betsimisaraka People.

Today, Fénérive Est is a small town, recognizable with its main artery lined with palm trees. After the obligatory city tour, you will feel compelled to seek out the beach with its view of the islet in the middle of the bay. Take a seat and taste the rums arranged locally, at sunset. All to the sound of the baffles that broadcast "tropical music" to the fullest. Note that Fénérive has produced several successful and well-known Malagasy party artists, even on the Hauts-Plateaux, for decades or more.

Let yourself be intoxicated by the scents of cloves or vanilla. Life is good, take the time machine. You may go visit the lemurs on TOMORROW Island.

The Capital of the Analajirofo Region is located on the East Coast of Madagascar. Ile Sainte-Marie or Nosy Boraha is opposite. This sector is subjected to the onslaught of cyclones every year. Consequently, it remains very wet. Cash crops, such as cloves, pepper and lychee abound here, hence the name of the region: "the forest of cloves". The scents of this highly sought-after medicinal plant will surprise you as soon as you approach Fenoarivo.

From Toamasina, National 5 leads to Foulpointe then Fénérive Est, passing through Mahambo. This road of about 100 km allows the flow of these cash crops. It is ravaged by heavy rains on a recurring basis. Be sure to find out about the condition of the road before taking it. This does not prevent summer visitors from enjoying the beaches of the Coast to get away from the big noisy city of Tamatave.

In addition, the streams of collector trucks favor the destruction of the asphalt road and the birth of potholes. Several rehabilitation programs have been implemented by the various Presidents of the Republic. But every year, the population experiences enormous difficulties in transporting their productions.

Fenoarivo has the status of urban municipality with its 11 municipalities. From 18,000 inhabitants in 2012, it is now close to 41,734 inhabitants in 2018. Despite its economic potential with cash crops, the Fenoarivo sector remains landlocked and penalized by tropical weather. Some argue today that this part of Madagascar is a victim of climate change, just like the Deep South. In addition, deforestation is gaining ground.

How to get to Fénérive Est?

As a general rule, Fénérive Est is not THE destination for travellers, it is a stopover. You can stop there by joining Soanirano-Ivongo to reach Nosy Boraha by motor ferry or speedboat. After a long journey on the Canal des Pangalanes. Only spice collectors assiduously frequent the capital of cloves.

City tour and visit: what not to miss in Fénérive-Est

Nosy Akoho, "the island of chickens" is a must. But why such a name? Once upon a time, remember, King Ratsimilao, son of a pirate Thomas Tews or Thomas White (depending on the version of the genealogical history) and Princess Antavaratra RAHENA. He united the 2 clans in conflict for generations. He used military trickery and won the war on the Tsimbala. After, it seems, studies in England, in his father's country. He was crowned and enthroned King of the Betsimisaraka. He organized a big party on the island in front of Fenoarivo. A large quantity of chickens were cooked in a large pot, as it should be. Legend has it that the large pot, still full, was stolen. She was found in the prison of Fenoarivo East, on the Coast therefore. The versions of this remarkable disappearance can differ according to the storytellers. Until today, we lose ourselves in conjectures around a campfire and glasses of arranged rums. This is how the appellation Ile aux poules or L’Ile poule, Nosy Akoho, was born.

After this beautiful story, maybe you would like to visit the Lampy Museum? (If it still exists). You will see the huge cast iron pots. Those that King Ratsimilao surely used during royal feasts. We have prepared this slideshow Photo credit Nadège Imboantenaina for your city tour, as if you were there.

On a hill, you will certainly see an old fortified fort. It was erected by Radama 1st around 1820. Ask at the Office du Tourisme  a sworn local guide to accompany you. For more than obvious security reasons, do not go there alone on your own. You could feed the miscellaneous facts section.

After your tour, end your walk on the edge where you will be offered local menus in the gargotes. You will not be able to resist requests for canoe rides in the natural swimming pool or to reach Hen Island, Nosy Akoho. Despite the nonchalant atmosphere and sprinkled with arranged rums, we recommend that you remain vigilant and cautious as tourists. It may happen that some offer you, for example, the purchase of live lemurs or other things at your own risk.

We do not recommend any particular restaurants. We prefer to nibble on the edge while looking at the ocean and Nosy Akoho. (We are facing East, so no postcard sunset. Photographers will prefer the sublime lights of the sunrise over the Indian Ocean.)

As for accommodation, if you are by car, we recommend 2 addresses. First, our favorite remains La Pirogue à Mahambo, chez Dominique Lallemand. His hospitality is the warmest. You come from us. You will appreciate the natural swimming pool in front of the restaurant and the bungalows. 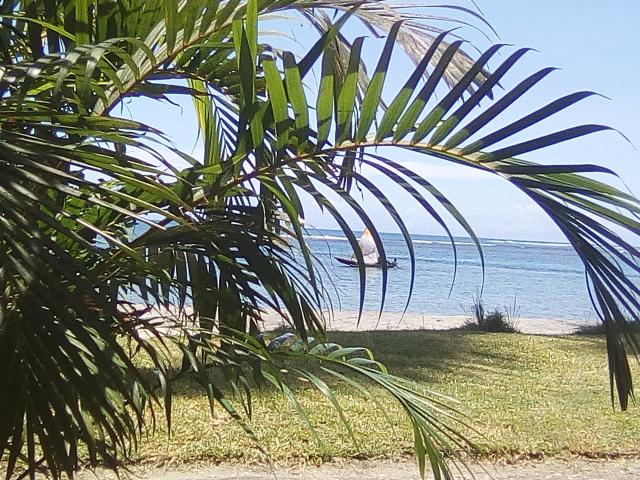 The second address is a little further: "To the nice fisherman". Also in front of the lagoon.

Other addresses exist, you will be spoiled for choice, depending on your project and your desires. But be careful of the solicitations (young underage girls, date rape drugs and other shenanigans for young or old vazaha tourists, HIV and COVID now…)

And finally, for all other information, consult the Facebook page of the Fenoarivo East Tourist Office. It is updated daily. Do not hesitate to ask us for a quote for your group for personalized services in complete safety.