How to NEPENTHES near Pangalanes Channel

During your hike in Akanin'ny Nofy (or Palmarium), you will come across this beautiful carnivorous plant that looks like a "jug" or "purse" according to some observers.

Its bright yellow color makes it attractive to the eyes. It is prolific in wet, swampy areas made up of freshwater-based sandy peatlands.Source scientifique

Where is the best spot to observe NEPENTHES in Madagascar ?

In Madagascar, it is located in 3 places: Taolagnaro (Fort-Dauphin), the Presqu’ile de Masoala and all along the Canal des Pangalanes.

Among Westerners, Etienne de Flacourt was the first to describe it in 1658. The scientific community of the time was surprised to find it so far from its main home, that is to say in Southeast Asia. This botanist was therefore the first to mention his establishment in the Big Island.

For scholars, he was the first to state the "endemic pitcher plant" Nepenthesenthes madagascariensis, simultaneously with the "Madagascar Periwinkle". Source : Wikipedia.

The plant has been the subject of numerous observations and studies to date.

The vernacular names always indicate the location of the plant or its pharmacopoeia virtues. By stating the native name, one can quickly know the diseases that it could cure. This encyclical know-how was lost with the arrival of Western botanists, who took pleasure in naming plants with Latin names.

What are the 2 fascinating peculiarities of this wicked carnivorous plant ?

The NEPENTHES would have medicinal virtues according to scientific sources.
Secondly: to keep it simple. Here is the extraordinary ingenuity of NEPENTHES. It is a carnivorous plant. It has developed an ingenious technick to capture its victims and ingest them, digest them. It produces in the walls of its "cup" in the shape of a jug or purse, a chemical product, sticky. This substance mimics the composition of the "pheromones" of female insects. And so. Once again, the males are attracted by this smell, conducive to meeting their females to copulate. This odor is considered "foul" to the human sense of smell.
This trap is said to be passive. The victims are captured without the trap being otherwise active. Botanical observers add that the trap is shaped like a leaf connected by a tendril to a leaf, shaped like an urn. It is particularly attractive with bright colors and its nectar, called "peristome". The victim insects, thus captured, are hooked and will slide slowly to the bottom of the urn. The latter is filled with digestive fluid.
To reproduce, NEPENTHES produces a flowering on the basis of a cluster adorned with many small, red flowers. Regarding the seeds, the plant is said to be dioecious : it is either female or male. Male flowers have a yellow tip, which does not exist in the female gender. 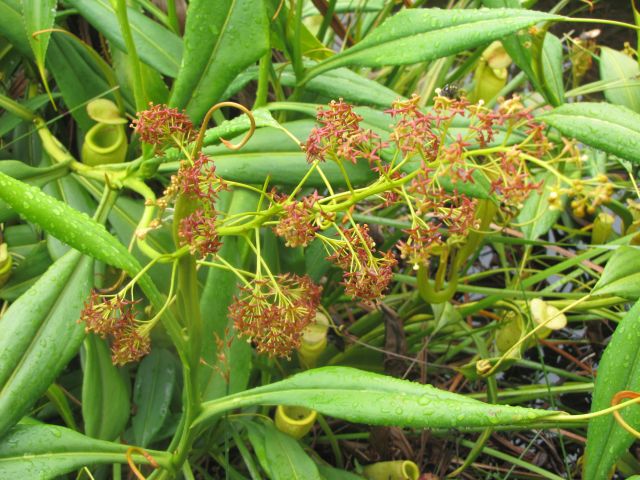 During a certain colonial era and in order to promote medicines of Western origin, scientists and doctors of the time (including those trained in medical schools in Madagascar) denigrated the indigenous pharmacopoeia.

Here is a reference that tells us medicinal virtues of Kapilanomba.

Book published in 2006, in the Journal of Ethnobiology and Ethnomedicine 2:22 (2006) : Medicinal plants used by women from Agnalazaha littoral forest (Southeastern Madagascar)

The treatment methods listed according to their classifications :

You can download this article here in pdf format.

Other sources of information are available from this platform FOFIFA et du Département Forets & Biodiversité.

To conclude this discovery meeting, we suggest that you take the time to observe the fascinating implementation of the NEPENTHES trap during your hike during your stay in Akanin'ny Nofy.