Creation of the Pangalanes Canal

General Gallieni decreed, on May 30, 1896, the construction of a canal. The French Company of Madagascar undertook the first works. The Compagnie des Messageries Françaises then took over.

Why is it called Pangalanes ?

In Malagasy "Ampagalana", the place where we take the goods. That is to say, the place to Adevoranto where at the time the inhabitants of the region exchanged with the canoes who delivered the productions of the interior of the lands and existing channels.

Gallieni's intention was strategic: he wanted to control the region administratively and militarily. The Canal was planned to go along the coast. It was not possible to carry military equipment through the Indian Ocean: the sea was and is still very tumultuous.

The duty of remembrance obliges us to recall that Gallieni and his colonial administration brought 4000 Coolies from China for this great project. The climatic conditions and the hardness of the work were the reason of these men: only 500 survived in 1906! Some deserted and settled inland.

Originally, the Canal began at Foulpointe and ended at Farafangana for a length of about 567 km. Today, much of it is rendered unfit for navigation because of water hyacinths, especially the northern part, as well as the southern part of Mananjary. 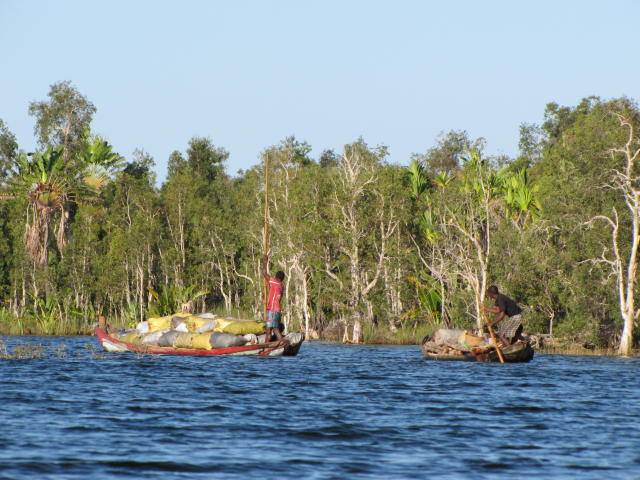 canoe on the Pangalanes Canal

These boats can be called canoes called monoxyle, ie consisting of a hollow tree trunk and maneuvering with a paddle. We can also cross bamboo rafts, propelled by a pole.

Nevertheless, the Canal is currently navigable over a length of about 450kms. Fortunately, for us: we can make cruises or mini-cruises on a large part of this canal and go along or visit several typical and isolated villages of the East Coast of Betsimiraka Country. The houses are rather traditional huts placed on stilts and sometimes the walls are mud. In some places, we can see some hard churches or a box in the shape of an overturned canoe.

Recently, a project of valorization and safeguarding of this material heritage of Madagascar was the subject of a partnership and bilateral cooperation with the Moroccan Agency Marchica MED SA and the Government of Madagascar, validated on November 21st, 2016 at the Palais d ' Iavoloha.

Contact us for a tour and discover the Pangalanes Canal